Today we are going to look at a man who had a dream from a young age. How many of you out there were alive in the 70s watched the movie Star Wars and say it changed your life? And as a result of watching it, you wanted to be a hero of some kind, or fell in love with high tech toys. I’m sure if you search the web for high tech stories you will see a good percentage of them were from someone who watched Star Wars.

Well today we are going to hear about a boy who did that very same thing. He told himself, “I’m either going to be an astronaut, a movie maker or dead by the time I’m 30.” I have heard that statement from him myself and what he meant was the only way he would not have achieved either of those dreams by the time was 30 was if he was dead. Here is Rob Skiba’s story:

I firmly believe that if you have a dream, it is because God (the Dreamgiver) gave it to you… and He wants you to achieve it. Why? Because He wants to achieve His will through your passion. How cool would that be? Doing what you love and knowing you are fully in the will of God?

I accepted Christ as my Savior in 1977. That same year, I saw Star Wars for the first time. After seeing it 12 more times, I knew EXACTLY what I wanted to do with the rest of my life. I wanted to make movies – and I spiritualized it by adding, “for God.”

I chased that dream with all my heart… until it led to bankruptcy, divorce, losing both my business and my house and ultimately becoming homeless, living in a Dodge Stratus with everything I owned crammed into it – ready to put a bullet in my head.

Where did I go wrong? I thought I wanted to “make movies for God” but He wanted to make movies through me. And that's the difference. When you put Him first – pursuing Him with all your heart – then, He will work through you to give you your dream. Today, I am developing a new sci-fi series called SEED – co-laboring with God – and living my dream!

It says in Scripture, “Delight yourself in the LORD and he will give you the desires of your heart.” – Psalm 37:4. I truly believe this!

When I met Rob, it was a mutual friend, Denise, who introduced him to me at a Bible study. All I was could think was “He looks like he needs a friend right now.” So I stuck my hand out and introduced myself. The next day we sat in a coffee shop as he shared he did not know what he was going to do next. I offered him a place to stay at my home till he got on his feet.

When he said he lived in a Dodge Stratus, he meant it. I’m not sure how he could do anything else with it. That car was packed from top to bottom. He shared with me he had just gone through a divorce and bankruptcy. He also said, “I have nothing, so I’m starting over. I think I’m going to Hollywood to make movies.” I told him, in a knowing kind of way, “No, you’re staying right here in Dallas. You will find movies here, I’m sure.”

Of all the people whose stories I’ll tell this week, this is the one closet to my heart. Just like Rob, I was a dreamer. God had put a vision in my heart to start this very coaching business, helping people. While Rob was going through his challenges, I was facing my own to become a writer and speaker. I was able to tell Rob with conviction that he was not going to California because his story and mine are similar. After my divorce and business failure I was going to California, too. I ended up in Texas, and someone told me the same thing: God had a plan for me right here.

I know that Rob went through times where he would spend nights up working, mainly from not being able to sleep. But those times were also while he was still healing from the loss of his wife.

He had a lot of gut-wrenching challenges. Sometimes, he would find work that paid really well. Then unexpected bills would show up and he would have to spend all the extra money to pay that bill. I remember when he first started dating again. I was there when that ended in heartbreak as well.

Rob kept faith alive in his life. Hope that he was doing what pleased God was what kept him going. I was also there the day Rob married his true partner in life, his new wife, Sheila. I

watched as they met, and remember the time about a year before they were married when he told me, “I don’t think she is the girl for me.” Then I watched as they started to plan a wedding like I’ve never seen before. They were one of the couples married on July 7, 2007. Yes they are a 777 marriage.

Rob has seen each of his dreams come true. One by one God has been faithful to him. And Rob’s faith has grown stronger. I was in Rob’s first film here in Dallas. It was an honor to play a part in that rainy night of filming. The end result was I got to be a part of his dream.

What is Rob doing now? He is currently working as an independent film maker. He is working on a series called SEED. If you ever wanted to be a part of the film industry, here is your chance. I want you to go to this web site and help him raise the money needed to get this project off the ground. Visit it at www.Seedtheseries.com. If you want to help him make this series reality, go to the sow page and donate to this project. You can help with as little as $3.33 a month up to $3333.33 a month.  Or you can give a one-time gift as well. I encourage you to watch the clips.

The next time you think you are going through tough times, think about how Rob – who once lived in his car – is now married, has a son, and is living a dream God gave him watching a movie called Star Wars back in 1977.

What dream do you have? What great things will you do with your life? What if Rob had given up and ended his life while living in that car? You often hear people talk about how tempting it is when you face a struggle, or you are under spiritual warfare, to just give up. Well, if you do give, up, you just went through all that for nothing. Get a dream and live that dream. Have hope and faith that the dream God gives is one he will give you the tools to achieve.

His video about his life and being shaped for ministry. Yes Thats me it was my film debut. Watch Video HERE 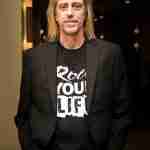 Tim Gillette is the Creator of The Rock’N’Roll Keys to Business Success, using music, motorcycles and mentorship to create Entrepreneurs who lead. To find out more about upcoming webinars sign up here  Sign up here